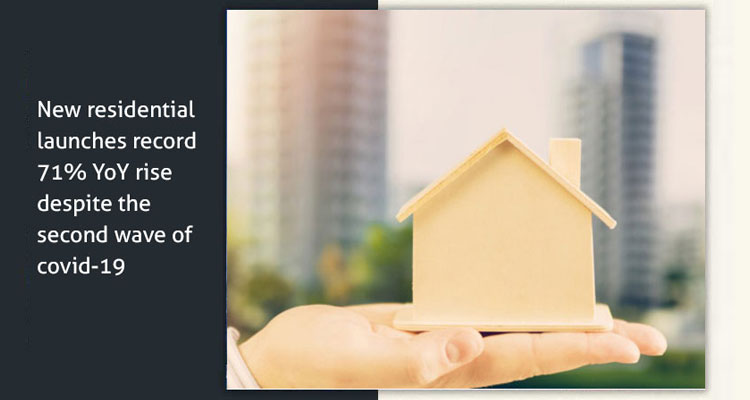 Despite the COVID-19 second wave, residential sales increased by 67 per cent year over year in H1 2021. According to a Knight Frank India research titled India Real Estate – Residential, January-June 2021, new launches increased by 71% YoY.
It added that total sales of 99,416 residential units were recorded in the first half of 2021 across key markets, while new launches totalled 103,238 units in the same period (January – June 2021).

According to the analysis, the second quarter of 2021 saw a 185 per cent YoY increase as the second wave of Covid-19 was less disruptive for the business despite its intensity.

Unsold inventory decreased by 1% over the same period last year as sales volumes stabilized, especially in the early half of H1 2021. The research stated that prices remained generally stable, with a year-over-year (YoY) decrease of 1% to 2%.

The share of mid-range and high-end property categories was an evident result of the epidemic. In the January-June 2021 period, sales of residences costing less than Rs 50 lakh fell by about 500 basis points (BPS), accounting for 42 per cent of all sales.

Homes costing more than Rs 1 crore accounted for nearly 19 per cent of all sales, while units priced between Rs 50 lakh and Rs 1 crore increased by 400 BPS to account for 39 per cent. The decreasing number of inexpensive homes (less than 50 lakh) is directly tied to the pandemic’s issues, which weakened the economic confidence of home purchasers in that group due to the threat of job loss, reduced income, inching CPI, and other challenges, according to the report.

In the first half of 2021, new launches increased by 71% year over year, led by the Maharashtra markets of Mumbai and Pune. Developers took steps to capitalize on the strong demand in all areas, which resulted in a considerable surge in new product releases.

The limited-time stamp duty drop-in Mumbai and Pune, which boosted property sales, underscores the necessity for policy intervention to revitalize the residential market. Other states may explore comparable demand stimulation at reasonable times, based on Maharashtra’s outstanding performance, which will increase sales velocity and push economic activity.

The considerable increase in sales activity in 2020 halted the downward trend in house prices. In H1 2021, price levels in four of the eight markets were reported to remain unchanged or to expand modestly YoY.